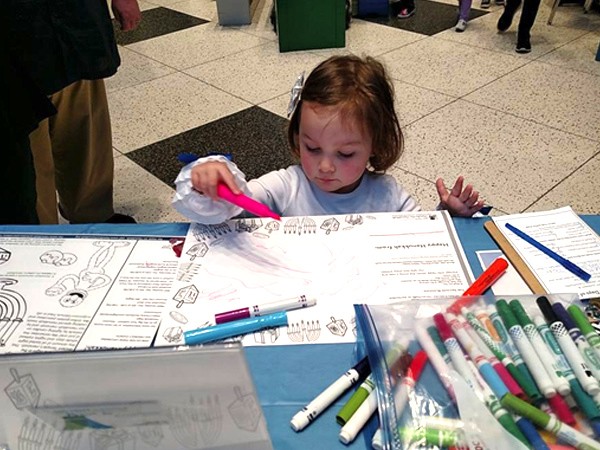 When Meredith fell in love with someone who wasn't Jewish, she knew their relationship’s future depended on his agreeing to raise Jewish children. They talked it out—he was on board.

Years later, Meredith and her now-husband are the proud parents of a toddler. But living in a neighborhood without many other Jewish families, Meredith was beginning to feel the weight of being solely responsible for her daughter’s Jewish identity. “It’s all on me to carry on the traditions and all the education,” she says.

An internet search for Jewish opportunities in her area yielded primarily synagogues, and Meredith didn’t feel quite ready for that level of commitment. Then she stumbled across a Facebook group for families in her neighborhood who wanted to connect to Judaism—and met Elise, the local program coordinator for Big Tent Judaism, a Federation beneficiary that reaches out to all unaffiliated families, especially interfaith ones.

The two women met over bagels and two new relationships were born— one with each other and the other between Meredith, her daughter and the Jewish community.

One-on-one relationships like these are the foundation of a new kind of “outreach” work to interfaith and less-connected Jewish families and individuals.

Through another organization addressing this population, InterfaithFamily, a rabbi and project manager work in communities to help couples, families, and young adults build relationships through programming that ranges from serious (like workshops or one-on-one consultations for new couples),  to social (like Cocktails and Conversation or Beer Tasting for Shavuot)—all supported by the digital backbone of InterfaithFamily.com, which reaches more than a million visitors each year.

Both organizations have the ultimate goal of making Jewish community a more welcoming and inclusive place.

Meredith is still taking her first tentative steps into her new Jewish commitment—mostly schmoozing with Elise and scouting out potential Sunday schools for her daughter. But with Elise by her side, she feels confident about her family’s place in Jewish community.

“Elise… always makes you feel comfortable,” she says. Raving about a recent Chanukah event at the Children’s Museum, Meredith remembers, “My daughter loved it! She got to have her picture taken with the dancing dreidels and be around other Jewish kids.”

It’s a relationship that’s meant to grow. Engagement professionals “nurture ‘trusted advisor’ relationships so that couples who initially seek [marriage]… will later consult them about finding a ‘good fit’ with a local organization, and later on seek help with a baby naming ceremony,” explains InterfaithFamily CEO Jodi Bromberg. “Ultimately we have alumni of our services and programs coming to ‘reunions’ because of the relationships they’ve established with our staff and with other people like themselves.”

For Elise, it’s the bigger picture that matters. “When Jews in every part of a city are engaged, the entire Jewish community is richer because of it,” she says. “A high tide raises all ships.”