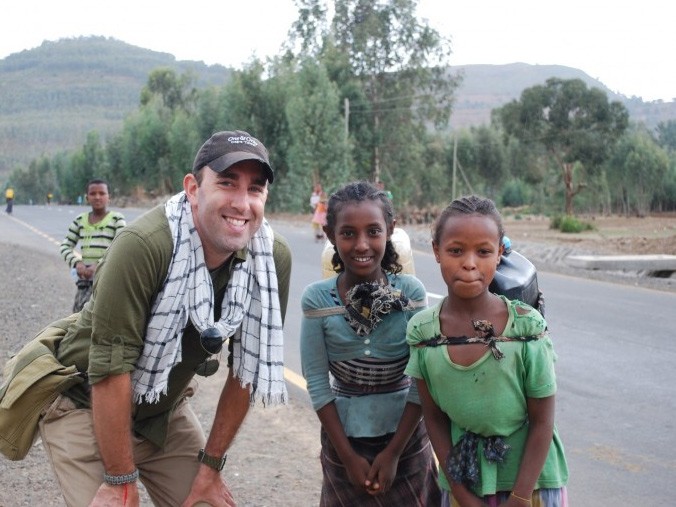 Bryan Drowos, a young Federation volunteer, stepped into a room filled with dozens of Jews praying at a Shacharit service. Men wearing tefillin rocked gently back and forth, prayer shawls draped around their shoulders. The sound of voices chanting in Hebrew filled the air.

But Bryan was not standing in his usual house of prayer. Rather, he was in the remote region of Gondar at a Jewish Community Center in Ethiopia run by the Jewish Agency for Israel.

“It was a surreal experience to see these Jews, who don’t look like us and are halfway around the world, having a service in Hebrew that sounds as familiar as the service at my own synagogue down the street,” said Drowos.

Bryan was among 43 travelers from Federations across the United States who accompanied 58 Ethiopian Jews making aliyah to Israel. Mission participants took part in the final airlift mission carried out by The Jewish Federations of North America in Ethiopia, an historic event termed “Completing the Journey.”

Over three decades, Jewish Federations have helped bring nearly 100,000 Ethiopian Jews home to Israel, working in close collaboration with the Government of Israel, the Jewish Agency and the American Jewish Joint Distribution Committee (JDC). Federations have also provided critical assistance in Israel, helping Ethiopian Jews to acclimate to their new surroundings and be absorbed into Israeli life.

It has been a truly remarkable journey for Ethiopia’s Jews. Decades ago, many traveled hundreds of miles on foot to Sudan where they boarded airplanes to Israel, the ancient homeland and modern-day state of the Jewish people.

Today, the Ethiopian-Israeli community has grown to 130,000 strong, and some of its members have risen to the highest echelons of Israeli society, serving as doctors, lawyers, teachers, businesspeople and elected officials.

The Future is Bright

Aboard the plane this summer with 58 of Israel’s newest immigrants as they flew from Ethiopia to Israel, “the excitement came as we landed in Israel,” Drowos said. “Olim were kneeling down and kissing the ground.  It was a very, very powerful moment to see the full spectrum of the work that the Federation is doing, that the JDC is doing, that the Jewish Agency is doing.”

Now that he has returned to the United States, Drowos is not just content to reflect upon the amazing experiences of his Federation trip to Ethiopia—he is re-dedicating himself to the unfinished work that still remains.

“My new mission today begins and that is to raise awareness and continue the fundraising efforts through Jewish Federation to help support these olim and to help support the country of Israel as we move forward into the next generations of Israeli society.”

View a video from this vital mission.