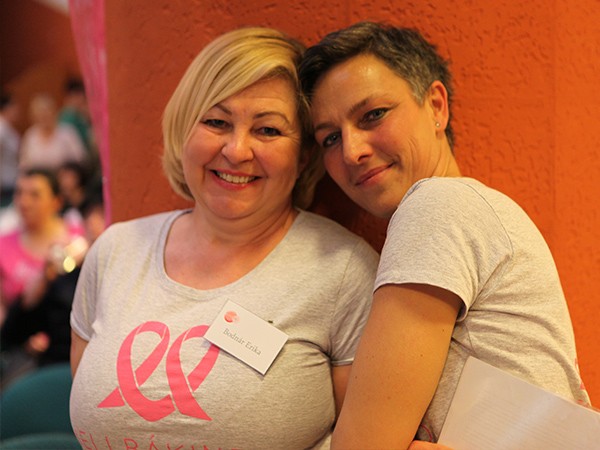 It started, like so many revolutions these days, with a blog.

Breast cancer is a taboo subject in much of Eastern Europe, and women there often feel alone in their struggles against the disease.

Bori Halom started blogging in 2012, largely out of a need to break this silence. Soon the platform grew into a support group for fellow Hungarian breast cancer patients and survivors that now connects over 900 women on Facebook under Bori’s motto “Together, it’s easier.”

These words also describe her relationship with Federation partner the American Jewish Joint Distribution Committee (JDC). Her support group is a partner in JDC’s Women’s Health Empowerment Program (WHEP), which works in Hungary and Bosnia and Herzegovina to educate about the importance of early detection, offer mammograms and provide support for women currently wrestling with the disease.

“We want people to know they’re still women,” she says. “My main goal is to break down the taboos, to shake the stigma, to end women being gawked at for wearing headscarves or having shaved heads. We never asked for cancer, it just happened.”

Once a year, Bori’s group gathers at Budapest’s JDC-supported Jewish Community Center for a daylong summit of mutual comfort and support. Women swap stories of chemotherapy and tragedy, remission and resilience.

From Zero to Recovery

About 350 miles away, Stoja-Mira Simic is standing adrift in a sea of pink. Growing up in a remote village in the former Yugoslavia, electricity was a late addition to her life, let alone mammograms. Besides, she had always had perfect health. So when a friend told her a WHEP mobile mammogram unit was coming to her village, she went because it was free.

Ten days later, she got the results. “I had cancer. I had to keep saying it to myself over and over—I have cancer,” she recalls.

A WHEP representative also led Stoja-Mira down the road to recovery, delivering first-aid packages and making sure she never felt alone. “It was as if we’d known each other our entire lives,” she says.

Once healed, she learned that women from a nearby town were traveling to Sarajevo for the annual WHEP co-sponsored Race for the Cure ®.  She immediately bought a ticket.

“When we arrived in Sarajevo, I suddenly saw a sea of 500 other women in pink around me,” she says. “I felt sadness that there were so many of us, but also joy that I’d survived and that my life was saved. I’ll attend the Race every year.”

For herself, Stoja-Mira and countless others affected by breast cancer, perhaps Bori says it best: “I’m very grateful to JDC. We started from zero. It’s amazing that they believed in my vision and were willing to follow me."