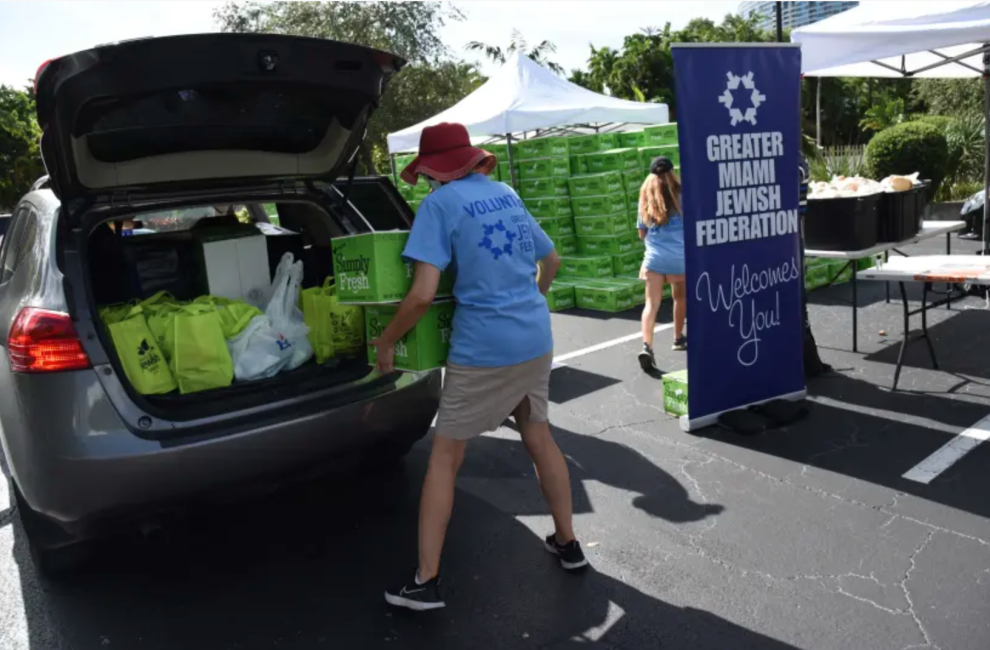 Above: On July 29, 2020, in Miami, volunteers distribute food at a kosher drive-thru site set up at the Greater Miami Jewish Federation. (photo credit: MICHELE EVE PHOTOGRAPHY)

WASHINGTON – Since early June, Florida has seen a spike in COVID-19 cases. The Sunshine State has recorded nearly 450,000 cases, second only to California. And with well more than 6,000 deaths, the state is struggling as the school year is set to start in only four weeks.

Vanessa Donaher is the head of Scheck Hillel Community School in North Miami Beach. “This really wasn’t a second wave,” she told The Jerusalem Post. “This was the more intense part of the first wave for us. We’re right in the center of the pandemic.”

Originally, Donaher had a comprehensive plan for students to return to school in person. About a month ago, the school decided to shift to a gradual return, where younger kids would return first, and more students would join them each week. But this week, they decided to nix that plan, too.

“This pandemic, if nothing else, teaches you flexibility,” she said. “Things started to get very, very bad in Florida. And we started to have concerns that maybe an in-person opening was not so safe.”

She said that after speaking to medical experts and witnessing summer camps that had to open and close, they decided to start the school year remotely.

“But with that decision comes a lot of questions: What is everyone else doing? What are the financial or enrollment implications of a decision to go online, especially if everyone else around us is not?

“We decided we would create a discount structure for the time when we are online so that we could credit our families financially,” Donaher said.

Jacob Solomon is the president and CEO of the Jewish Federation of Greater Miami. “I think we’re going to be dealing with the impact of this crisis for quite a while,” he told the Post. “I am reasonably certain that we’re not going to see anything like normal in the next three to six months. I think we’re looking at a longer-term recovery.”

According to Solomon, there are 125,000 Jews in Miami-Dade County, about a quarter of them living in “considerable economic uncertainty.” In recent weeks, Solomon said, the federations increased the number of people getting weekly home deliveries of kosher food from 500 to more than 800.

“We have increased funding for counseling for domestic abuse victims, job counseling, and volunteer programs,” he said. “Just today, about 300 cars showed up at the Federation building for a free kosher food distribution event. 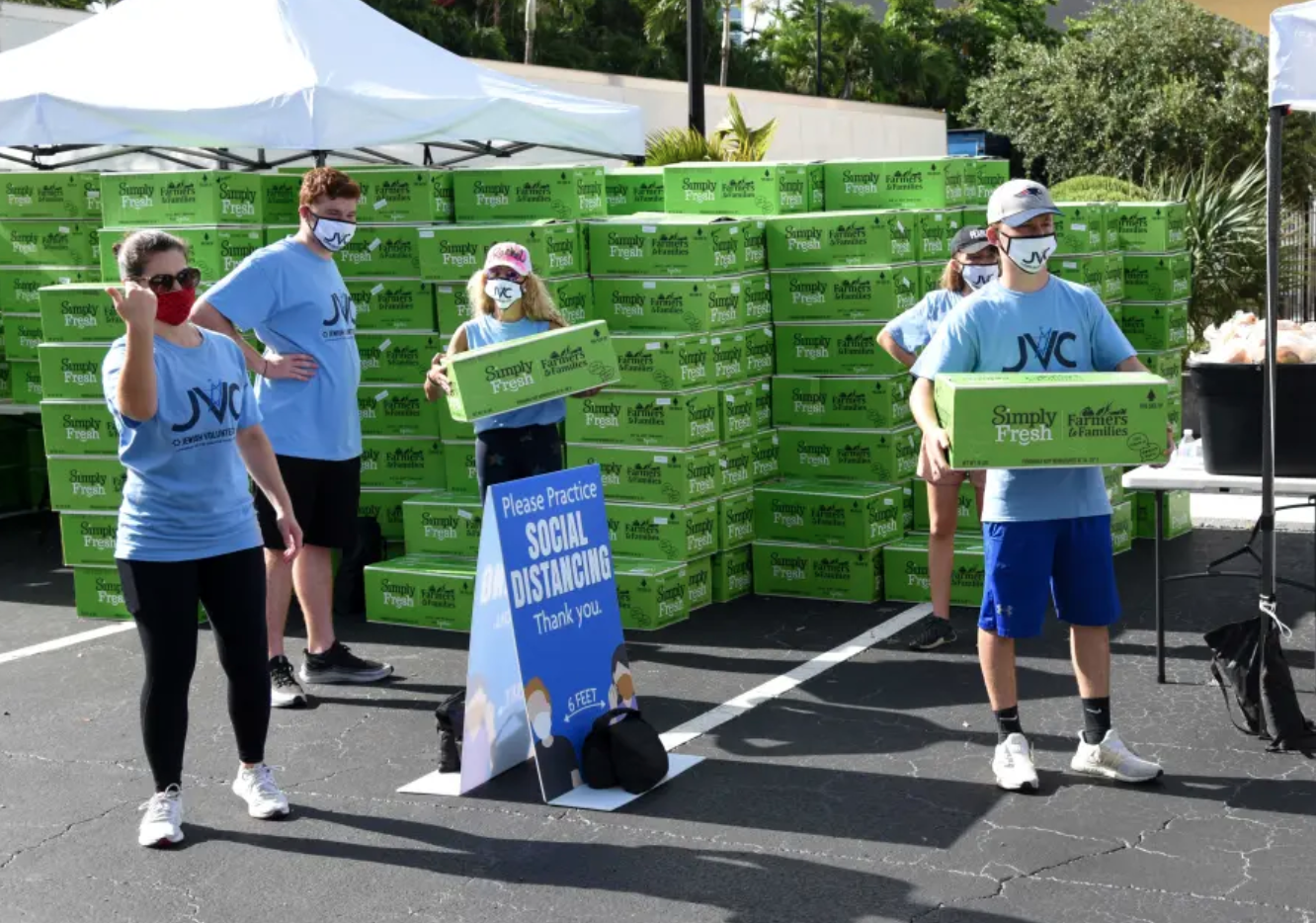 He told the Post that in retrospect, it is clear that when Florida started to reopen, it was still premature. But now, he says, people are taking those precautions much more seriously.

“I was in a parking lot the other day, and everyone I saw was wearing a mask; stores now are saying it’s mandatory to wear a mask. If you look at the Florida [numbers], you’ll see that it is starting to improve – but we’re still in a very, very dangerous place.”

Florida is also a home for thousands of Israelis. Ofer Tamir is leading a group of more than 450 of them, called “the parliament.” He told the Post that while many people can’t leave their houses, the group arranged numerous events online, featuring prominent Israeli speakers, from health experts to politicians such as Ayelet Shaked and Avigdor Liberman, with others to follow. “Most of our members are staying home, and that’s why we have our meetings daily in the afternoon,” he said.

For Rabbi Mario Rojzman from the Conservative Beth Torah congregation, this Friday will mark the 20th time that he delivers an online Shabbat service. “We went completely virtual – we think that this is the right thing to do,” he told the Post.

“We went virtually immediately in March when bringing people together became impossible. I imagined that this situation is here to stay. I don’t have to call it, ‘wave one,’ or ‘wave two,’” Rojzman said. “We need to adjust. We need to do the right thing, which means to embrace our people, to be permanently in contact with them.

“We’ve virtualized our spiritual life, and we know it’s not the same, but we know that we have each other,” he continued. “I only go out of my home for Friday and Saturday services, and to funerals. I don’t leave the house, because I think we need to be part of the solution. When I take care of myself, I take care of others.”

Rabbi Rachel Greengrass of the Reform Temple Beth Am told the Post that the staff is “trying to be there for the congregation when we can’t physically always be there,” and because they are “having more and more congregants who are testing positive for COVID.” She mentioned that recently, the father of a staff member had passed away from COVID. “It’s getting very close to home,” she said.

With the High Holy Days less than two months away, they are planning to prerecord the services so that members of the congregation can be involved in the service itself.

“We’re trying to think of plenty of ways we can make the community still feel like a community, and not just have it be people watching a movie of the service,” she said.

This article was originally published in the The Jerusalem Post.