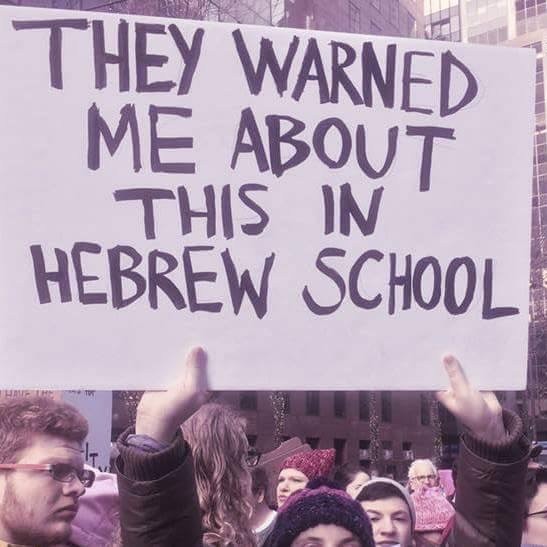 What is Jewishness in North America today, and how might our understanding of it and Jewish identity need to change — especially when it comes to education? Guest post by Dr. David Bryfman, chief innovation officer at The Jewish Education Project. 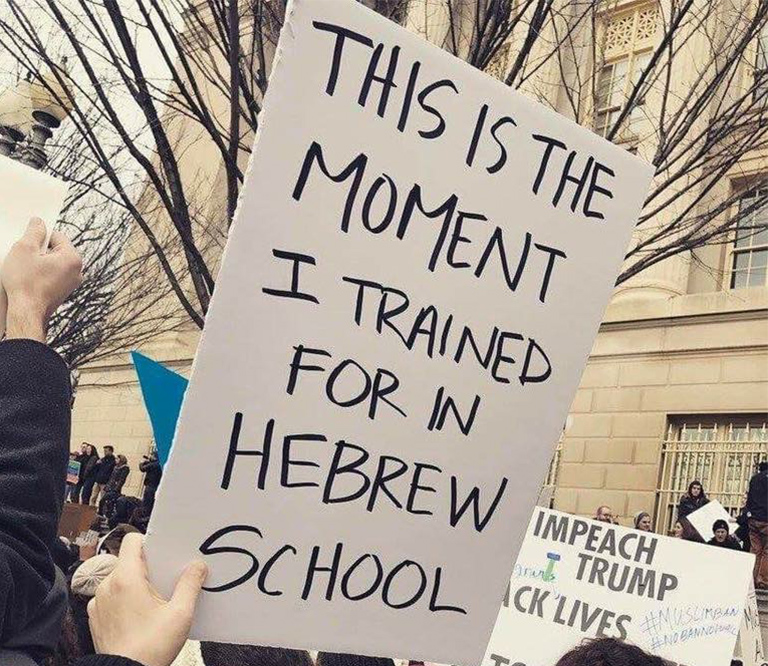 Admittedly, much of what follows is presumptuous. I do not know the bearers of either of these signs and therefore I don’t really know their intentions. Regardless, I am proud of both of them for marching when they felt called to do so. And yes, I do feel extra proud that they both felt that their Hebrew school experiences were important enough in their lives not only to empower them to march, but also to proudly tell the world that this was the case.

At its core, “They warned me about this in Hebrew School” is the placard of a Jew who feels under existential threat. Enemies are out there to destroy us – whoever the “us” might be. You might suppose that the bearer of this sign even sees the Jews as a possible future target.

... First they came for the Socialists, and I did not speak out - Because I was not a Socialist.

Then they came for the Jews, and I did not speak out - Because I was not a Jew.

Then they came for me—and there was no one left to speak for me.

For the Jewish holder of the first sign, the current social and political environment signals a threat to Jewish security, even if at first the targets are Muslims, homosexuals or others.

For the holder of the second poster, the message is perhaps more universal, but certainly one filled more with pride than of fear. For this person, Hebrew school was not necessarily one filled with images of the Jews as the persecuted victims, but rather as bearers of moral clarity that can bring justice to the entire world. The call to action that this Hebrew school inspired is that “I cannot stand idly by” - the carrier feels morally obligated to pray with his or her feet.

It is not my intention to signal one sign as being necessarily better than the other – but it is my intention to point out that the two signs do seemingly represent a major shift in North American Jewry and Jewish identity today.

This shift may be generational or may be attributable to other forces. Either way it is very real. Younger Jews in the mainstream today do not feel a threat to Jewish existence. They see the world more through universal eyes than tribal ones, and they are increasingly asking the question, “How can being Jewish make the world a better place?” This question is in sharp contrast to the primary question of many older generations, who would ask only, “Is it good for the Jews?”

In reality, this binary may be very fluid. There will often be moments in many Jewish lives when people feel called upon to express their deepest humanity, and moments when we will choose to preference our own people.

However, for Jewish leadership concerned with the engagement of young people today, the distinction between these two posters is very real. Attracting Jews whose worldview is colored by their own persecuted history is very different from attracting those whose worldview is personified by freedom. It is one agenda to promote Jewish continuity because our most essential purpose is to create further generations of Jews. It is another agenda to promote thriving Jewish communities that strive to make the world a better place. In a moment in time when upward of 70 percent of non-Orthodox Jews are in interfaith marriages, it is clear in which direction the trends are heading.

For Jewish communal organizational leaders to remain relevant today we must realize that the Jewish population under a certain age quite firmly stands behind the second poster. Further, it is our responsibility as Jewish educators to unabashedly and proudly say that one of our key purposes is to empower Jews with the knowledge and skills to make the world a more just and equitable place.

This could be quite shocking, and perhaps even threatening to us, because most mainstream Jewish communal institutions today were developed in the milieu of the first poster. But our ability to pivot, even dramatically, will largely determine our capacity to remain relevant to the younger generation of Jews today and tomorrow.